On the growing need for quantum labour

As of mid-2022, of the 176 university-level quantum research programmes available, only about 16% have graduate-level degrees in the subject. Read on to know more about the shortages of skilled quantum labour.

With artificial intelligence technologies now key to advancing business processes the world over, a key area coming to the fore is the shortage of skilled AI labour. Arguably, an even wider skill gap exists in quantum computing, with research from McKinsey & Co. finding that there is only about one qualified candidate available for every three quantum job openings. This, McKinsey writes, “threatens to stall progress on breakthrough quantum use cases, jeopardising the creation of a massive amount of business value.”

Massive business value sounds about right, given experts’ estimates of quantum computing alone – which represents the largest market potential for the three main areas of quantum technology (the other two being quantum sensing and quantum communications) – accounting for almost $700 billion in value.

Yet, although the talent gap is wide, interventions such as upskilling experts in adjacent fields could go a long way in bridging this gap. If not, only about half of the openings in quantum computing jobs are expected to be filled by 2025. 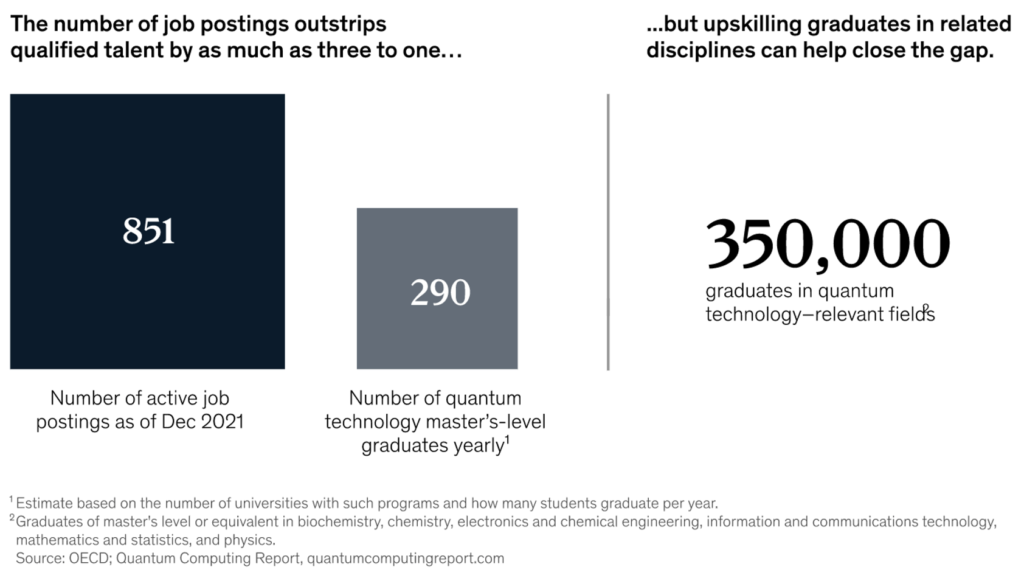 Most of today’s quantum investments have been concentrated in hardware, with both established tech firms, as well as quantum startups being the first to deal with the vagaries of a skilled-labour crunch directly whilst they compete to solve fundamental problems of the field and delivering fault-tolerant quantum systems crucial to unlocking its true potential. McKinsey opines:

“With this progress, the demand for quantum talent is shifting, first to software companies and then to enterprises that will use the technology. Leaders across industries are already beginning to assemble quantum teams and test early-stage algorithms on the current class of quantum systems. This includes, for example, exploring how quantum algorithms can improve encryption protocols in financial services, optimise routes and fleets in logistics, and improve clinical-trial site selection in pharmaceuticals.”

The clarity in need for talent

The growth of graduate programs in the field will be crucial to the necessary development of a robust talent pipeline in quantum technologies. As of June 2022, of the 176 university-level quantum research programmes, only about 16% have graduate-level degrees in the subject. Beyond this, many of the same investments and strategies firms use to build their AI teams will come in handy. This chiefly involves upskilling existing workers and creating pathways for new talent.

In this regard, however, firms need to learn from the mistakes they made in the initial days of their AI hiring. There wasn’t enough clarity on the kind of roles and tasks that they were hiring for in the first place, thereby resulting in far lower ROIs that, in turn, slowed labour investments.

In the case of quantum technologies, with talent needs still evolving, the challenge mentioned above remains. However, with technologies maturing and organisations gaining greater clarity on the skills likely needed to build a stable quantum strategy, the technical areas that can be stressed include the following: 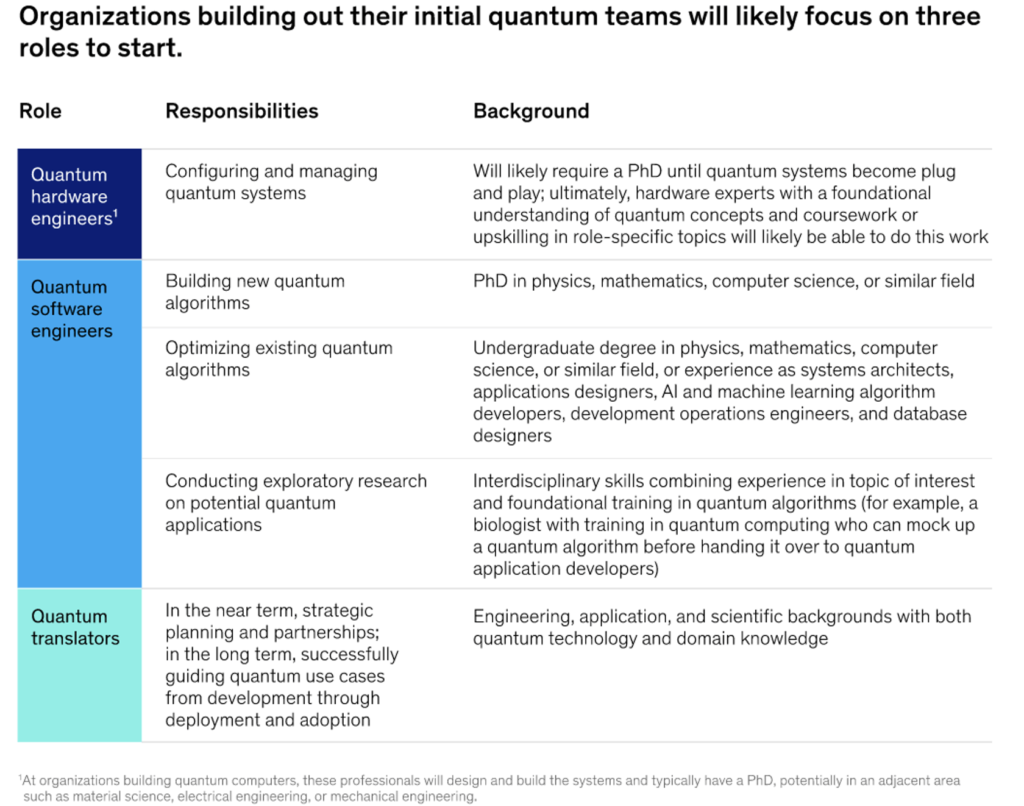