India could become a massive market for the 5G industry with its huge telecom market.

5G is scaling faster than any previous mobile generation. By the end of this year, 5G subscriptions are expected to reach 1 billion, per the latest Ericsson Mobility Report. Globally mobile network data traffic has doubled in the last two years, driven by continuing growth in smartphone usage, mobile broadband and the digitalization of societies and industries. By the end of 2022, the average monthly usage per smartphone is expected to surpass 15 GB and grow to 40 GB by the end of 2027.

Fixed wireless access (FWA) is an area growing in importance, and more than 75 per cent of service providers surveyed are now offering FWA services. During 2022 the number of FWA connections is expected to exceed 100 million, a number forecast to more than double by 2027.

India is one of the hottest markets for 5G, with consumers eagerly waiting for the mass-scale launch of 5G handsets and services from communication service providers (CSPs). An Ericsson ConsumerLab report says that 5G is projected to account for almost 40 per cent of mobile subscriptions – 500 million – by the end of 2027. By then, smartphone users in the region are forecast to consume 50 GB of data per month on average.

There is significant consumer interest in adopting 5G – as the study indicated, 40 million smartphone users could take up 5G in its first year of availability. Indian consumers also claim to be willing to pay 50 per cent more for 5G bundled plans. This presents a unique opportunity to grow revenue within a market that has historically had very low ARPU.

According to an Ericsson-Arthur D Little study, 5G will enable Indian mobile service providers to generate USD 17 billion in incremental revenue from enterprises by 2030. Much of this is projected to be driven by the adoption of 5G in the manufacturing, energy and utilities, ICT, and retail industries. 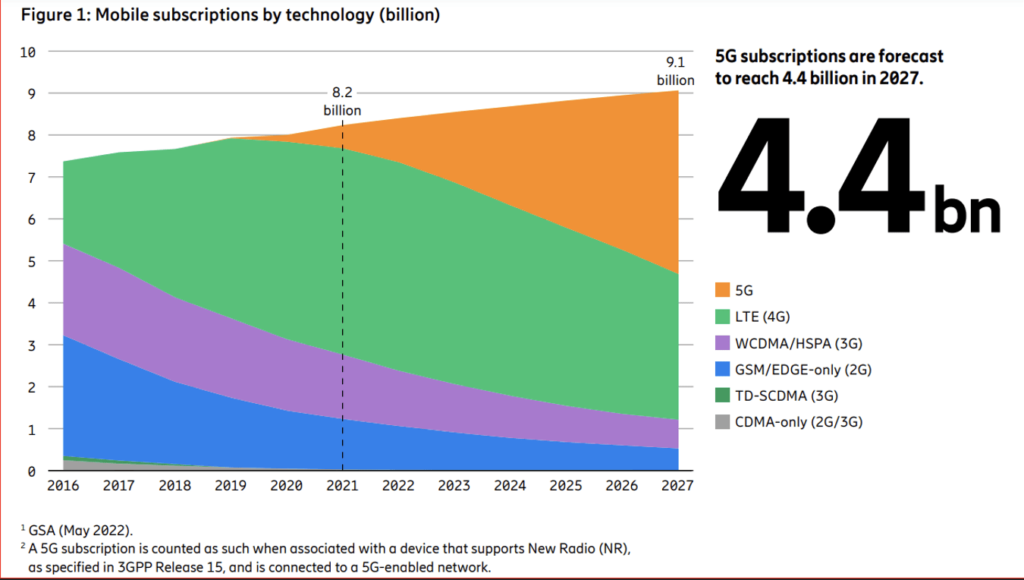 Indian enterprises consider 5G to be the most important technology for their digital strategies. 5G will also enable service providers to launch new services for consumers, including home broadband (5G FWA), enhanced video, multiplayer mobile gaming, and AR/VR services. Consumers anticipate that service providers will offer pricing plans with service bundling and data sharing. 5G can play an important role in achieving India’s digital inclusion goals, especially in bringing broadband to rural and remote homes. Trials have proven the potential offered by 5G to bridge the digital divide by enabling access to high-speed broadband through FWA.

While India presents significant opportunities for growth, it also holds challenges for service providers. Indian service providers have recently been raising the price of data (the average price of 1GB of mobile data reached USD 0.68 in 2021), and mobile services revenue has continued to grow. Despite this, service provider ARPU remains low. Moreover, India has some of the highest prices for spectrum in the world, constraining service providers’ ability to invest in infrastructure.

Service providers worldwide continue to switch to 5G, and more than 210 have launched commercial 5G services globally. Deployment of 5G standalone (SA) networks is also increasing, with more than 20 commercial launches at the end of 2021. The most common 5G services that service providers have launched for consumers are enhanced mobile broadband (eMBB), fixed wireless access (FWA), gaming and AR/VR-based services. When it comes to 5G offerings for enterprises, the most common segments targeted are manufacturing (smart factories), transport, smart cities, and ports.