India has changed drastically over the last eight years of Prime Minister Narendra Modi’s rule. What has changed? How has it changed? The change brought what good or bad?

For every moment of adversity or embarrassment, we have a solution.

Every time we cannot get any bread, we are served cake.

It is indeed interesting that we do not think twice about trolling farmers and migrant workers and job aspirants and tribals, and the underprivileged if their narrative goes against the groundswell of majoritarian opinion. It is as if the smaller issues of salaries and security can wait as long as there are the bigger ones of statues and surgical strikes.

In 1943, psychologist Abraham Maslow created a model of the “hierarchy of human needs”, a theory of human psychological health based on the fulfilment of prioritised needs, starting with the absolute basic physiological ones and ending in self-actualisation. Simply put, the model looks thus… 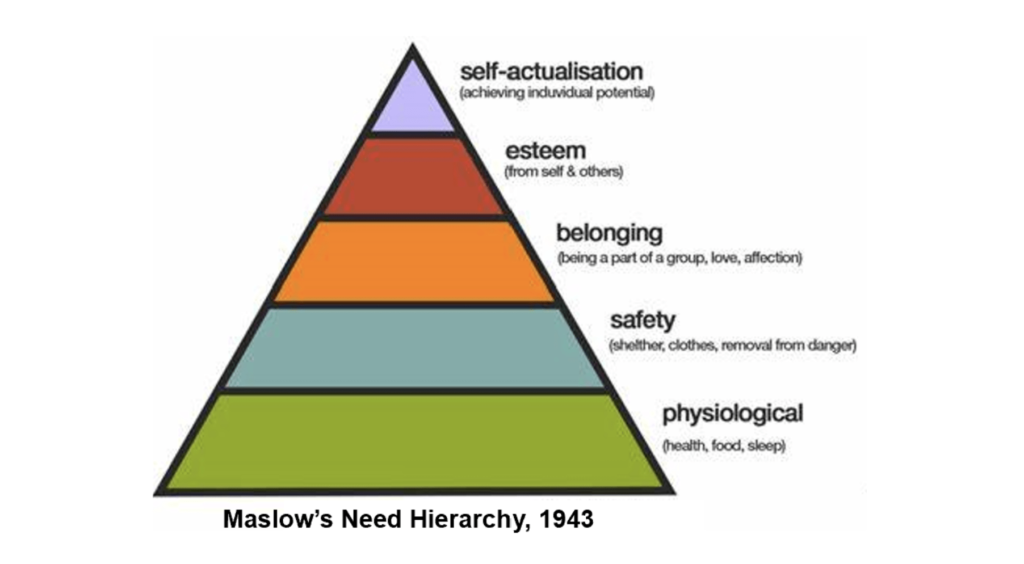 An average human being starts from the bottom, going up. We typically spend all our lifetime crossing each level, with only a handful reaching self-actualisation. Since he created this model, logic has more or less stood the test of time in most countries, from the developing to the developed. The Maslow Need Hierarchy pyramid is a model any government chooses to follow when planning national development.

Yet, in India, we do not seem to break the stereotype. We seem obsessed with issues other than jobs, food security, health and social justice. Statues, seers, super-fast trains, spiritual conferences and temple corridors occupy our discourse as matters of national importance. Seems we have reached the stage of self-actualisation already.

Lenin had said, “How can a man think with his mind when his throat is parched?” Lenin was…a communist. And communists do not understand and appreciate civilization or culture, or spiritualism.

Amartya Sen talks of the critical importance of health, education and girl-child development before all else in most of his writings. Professor Sen is…an outcome of western funding and thinking that does not wish to see a truly prosperous and powerful India.

There is a new need hierarchy pyramid in India. It has taken a few years to take shape and is now fairly evident. I call it “Modi’s Need Hierarchy” circa 2022. 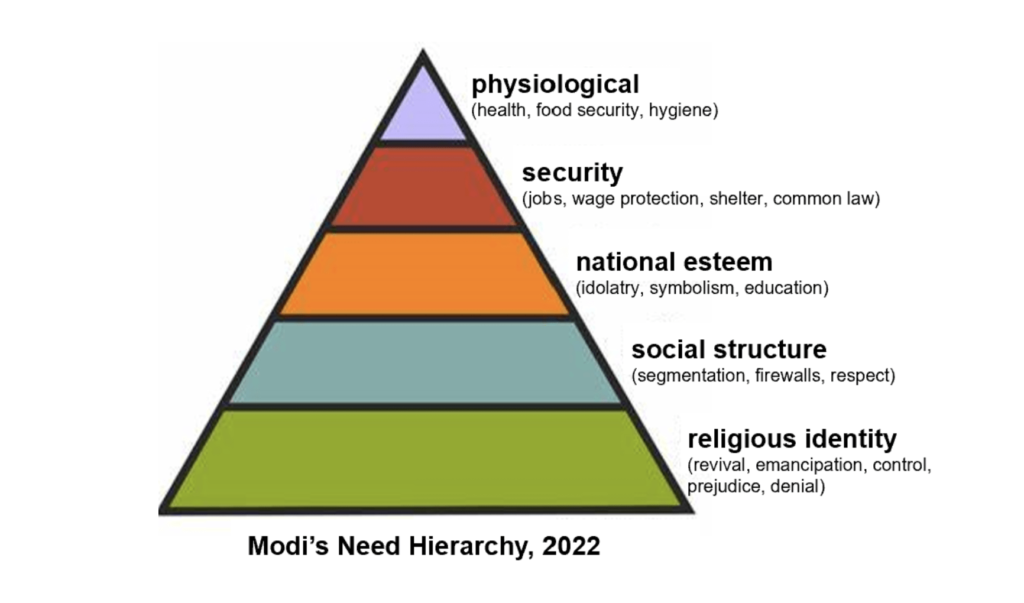 Our prioritisation starts with identity by faith and ends with issues like health, hygiene and food security.

Talk to the man and woman on the street, across socio-economic strata, and the issues that bother them will be faith, identity, exclusion, segregation and symbolism of nationalism. Unless that person is in the minority, either by faith or education. The larger part of the nation believes that true emancipation will come through the establishment of a “Hindu Rashtra” and the reinstatement of the Hindu as the rightful ‘owner’ of this land called Bharatvarsha.

There is a level of spiritual stoicism when confronted with issues like unemployment, the growing cost of living and inadequate civic infrastructure. It is like asking an ascetic about the joys of family life as if life has progressed beyond mere physical issues into the spiritual. And all questions shall be answered through spiritual uplifting. Once the temple happens, jobs will emerge. Once the citizen roster is created, the prices will come down. Dharma will ensure karma!

Is this an aberration? No, it is not. One of the biggest critics of Maslow was another social psychologist called Geert Hofstede.  He challenged Maslow’s hierarchy. He explained that prioritisation changes based on whether the society is primarily an individualistic one or a collective one. In the latter, the more immediate needs are of social acceptance and cohesion more than individual physiological needs. Also, the level of social development in terms of education and collective knowledge plays an important role in prioritising. Typically European societies, which are more individualistic, may explain the Maslow hierarchy. Collective societies, such as in Asia, may choose a different path altogether!

Has this happened over the last eight years? Not at all. We have been a collection of different peoples and principalities for centuries. Division, classification, exclusion and bigotry are in-built into our individual and collective psyche. That is how we have lived for centuries as different dynasties and empires across faiths. We have always been wary of all fresh settlers and visitors. We have always been cagey in our approach towards exploration and spreading out.

We have connived with ‘outsiders’ to destroy our neighbours for short-term gains. We have always abhorred rebels and revolutions. The much-extolled examples of inter-faith conviviality and social reforms are exceptions and never the norm. Even today, a Brahmin holds sway in society while a ‘lower’ caste person refrains from divulging the surname. Even today, we have flash-points like Sabarimala and killings over water wells.

1947 was an aberration for us. We were suddenly pushed into becoming one physical entity, choosing one common flag, singing one common anthem and being governed by one constitution. We were suddenly told that the state has no religion. We were not monarchical anymore but democratic. It all happened overnight and took us by surprise. In the euphoria of collective independence, we built dams, steel plants, engineering colleges, hospitals and post offices.

These were the “temples of Modern India” as if the temples of yore were vestiges of the past. Over our visages of faith, class and regionalism, we were made to wear masks of unity, secularism and socialism. These facades were forced upon an illiterate yet idealistic nation that believed in the dream woven then.

The situation came to a snapping point around 2010 when people decided to stand up against corruption. A group of people realised this was the best platform to remove the masks and drop the facades. The movement that started as a protest against years of corruption, nepotism and dynastic rule slowly but surely evolved into one of religious revivalism under the convenient garb of nationalistic resurgence!

We cannot blame the powers for where we stand today. We are responsible for where we stand today. The powers have merely read the sentiment and made the most of it. A mere eight years could not undo 67 years if genuine foundations of secularism and socialism were built. Acts of bigotry and fundamentalism that happened before 2014 were not exceptions but actually, just the first bubbles of the water that was about to boil fully, spill over and singe.

Maslow was wrong, after all!

Also Read: Society: Not dark yet… Symbols of performance (Chapter 3)

(Avik Chattopadhyay is co-creator of Expereal India. Also, he is the former head of marketing, product planning, and PR at Volkswagen India. He was associated with Maruti Suzuki, Apollo Tyres, and Groupe PSA as well.)